Centrica (the Company Formerly Known as British Gas) come with plenty of customer experience baggage. To their great credit, they are reporting their Net Promoter progress by publishing on their site a chart and downloadable numbers. They also list goals: "British Gas’ NPS at the end of 2009 was -2, placing us equal first in the league table of major UK energy providers with three other suppliers. Our target for 2010 will be to increase this score to +3." An example of transparency that we look forward to seeing more of. Source

Facebook’s privacy controls have been heavily criticized recently, but CEO Mark Zuckerberg is confident users care less about sharing data, more about possible subscription fees. And he knows this because he tracks what he calls “a special metric”, which most others call Net Promoter Score. "We've seen no meaningful change on the stats on any of that stuff," which is how he refers to people quitting the 'Book.“Whenever we make a change, the net promoter score always goes down. But it will usually recover to a higher place than it was at before,” he continued. “So when we started rolling out these changes after f8, our net promoter score went down. And we thought it was because of the privacy issues. But what we found was that it actually went down because we made changes to our news feed...” Interesting reveal there – we would dearly like to see some more stats on how they are surveying people. And whether they gave permission. Maybe its not just hubris though, as yesterdays “Quit Facebook Day” apparently was a flop, and did not result in a significant amount of “that stuff”. VentureBeat and Forbes

At a recent conference, Sony Canada opened up about their Net Promoter journey. Excellent tips from Wayne Ground, CIO of the Canadian division, explaining how it was not initially driven by executives, but after getting daily reports, the president was quickly on board. Customers are invited to complete online surveys on call center interactions, website visits and retail store visits. They have sent more than 100,000 surveys with a response rate of 23%.All detractors gets a follow-up contact from customer support. Promoters also receive a follow-up -- a coupon for future Sony Canada purchases. The promoters who receive coupons tend to use them, and sales transactions with those customers are 40% higher than the average purchase.Additionally, the company started to capture email addresses at the in-store locations. Once in-store managers and sales reps realized they were being evaluated, they caught on to the program pretty quickly, Ground said. The follow-up contacts have really made a difference: "When we phone back the day after they send in a survey, customers are blown away," Ground said. "They can't believe someone actually read it." Source: - SearchCRM.com

Sue Swenson - CEO of Sage North America opened Sage Insights '10, and revealed how it is "Maximizing existing assets". Sage has climbed 10 points in its Net Promoter score, which quantifies customers' "willingness to recommend to others." It's also boosted renewal rates from 90 percent up to 97 percent. Customer value comes from not just product functionality, EVP marketer Palsule said, it comes from how easy Sage is to do business with. Source DestinationCRM

Phones 4U Pay on NPS. Probably.

Mobile News reports on the fiendishly complex compensation scheme from High Street SIMmery Phones 4U. The scheme has so many "ifs" and "buts" it takes four paragraphs to summarise. NPS excerpt_ "Phones 4U sales consultants will now have their full commission entitlement paid out if the store hits a Net Promoter Score of 37.5. Previously, stores had to achieve a score of 35 for consultants to receive full commission." Mobile News

Bruce Temkin of Temkin Group blogs about how executives are using NPS: 400 people took their recent survey. Key numbers: 43% are using Net Promoter Score (NPS), and 65% of those people think that it has had a positive impact on their company. Temkin

Wall Street News - Our regular review of the 10-Ks

Chief Online Gavel Swinger John J. Donahoe called out how eBay is "...becoming a more customer focused company. We are driving improvements to our user experience and we are measuring our success with three customer oriented metrics; net promoter score, velocity and market share. I have tied a portion of our leadership compensation to customer satisfaction." SeekingAlpha

But the public knew this already, as eBay’s top goals for 2010 were revealed in a tweet by their corporate blogger, Richard Brewer Hay. Having seen a poster in a stair well in San Jose he posted an image of it on yfrog. The goals include 1) Increase eBay’s Net Promoter score by 10 percentage points. Source Tamebay

Nokia CEO Olli-Pekka Kallasvuo talked NPS on the call, referring to C3 with Ovi Mail: "Since January there have been 10 million downloads [...] Consumer engagement is very high. In addition, feedback on the user experience has been very good with a double-digit positive net promoter score since we launched." SeekingAlphaIn contrast Parks Associates research of the basic phone market called out some bad news for Nokia. Their Consumer Decision Process research of CE product buyers showed Nokia, once the unequaled leader of the U.S. mobile phone market, last year fell to the bottom of the list of brands of basic mobile phones that people would recommend, as measured by Net Promoter Score (NPS). 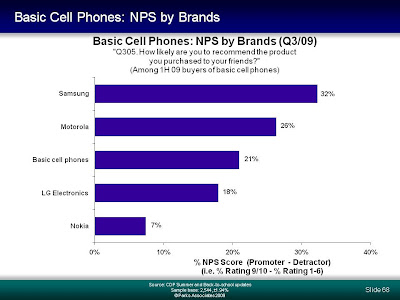 Frank Blake, boss of DIY shedder Home Depot explained on Q1-2010 call called out customer service as key to success: “Last year, […] we re-trained every associate in the company on our customer service expectations. […] We’ve seen consistent improvement in our net promoter score […] in the first quarter, 600 basis points over last year, even as our transactions increased 4.2%.”Analyst William Truelove from UBS is one of the few bankers we have seen ask about customer service (so for that he gets our “Analyst of the Week” prize) and quizzed EVP Ellison further “…Did you have any kind of service metrics from the customers?”. Marvin Ellison shoots back “Frank talked about the net promoter score […] We get roughly 100,000 customer surveys per week that we look at […] trying to make sure that we have incremental improvement week over week, month over month." SeekingAlphaFrom another source we learn that Home Depot net promoter score (a score measuring customer loyalty) is almost 70%, an improvement of 800bps in the past year, (Shareholder Meeting 20 May 2010)

Mark Frissora, Hertz CEO called an increase of nearly 8 points in NPS “Our net promoter score rose 790 basis points in the US or 18%, reflecting the appeal of a newer fleet and the addition of popular new car classes.” We estimated Hertz NPS at around mid 50s last year (https://customergauge.com/2009/02/net-promoter-news-hertz-drives-26-in-europe/) so that may put them in the 60s – firmly in the Cadillac class. SeekingAlpha

UK BMW seller Vines reports a 66% year-on-year increase in its Net Promoter Score results, as computed by Mondial. Vines BMW (or Mondial) say they have gained insight into its customer satisfaction levels, and using this to predict future business growth. Note of caution: the math is provided by a PR company, and based on that, it's unclear if that's and impressive 66 NPS points up (impressive only because it must have been a low base) or a 66% increase, i.e. 10 to 16, (equally non-impressive). Still, they pepper the text with superlatives, "massive" and "huge" so that must be good then. Source

The fantastically named RV Daily Report tells us that Kampgrounds of America has added yet another guest feedback service for its franchise owners to help them improve service and drive camper nights through increased referrals, based on Net Promoter Score. KOA’s new on-line camper feedback survey offer KOA owners near-instant feedback from their guests following their stays – so far 9,200 surveys have been completed by the campers. RV Daily Report

Advanced NPS® Strategies Nobody Talks About